Next week is going to be a monumental week for college and high school journalism/photojournalism students throughout the Buckeye State.
Two very respected and influential speakers will grace our college campuses to talk about:
·      the powers of the photographic image
·      speech freedom “within the schoolhouse gate” 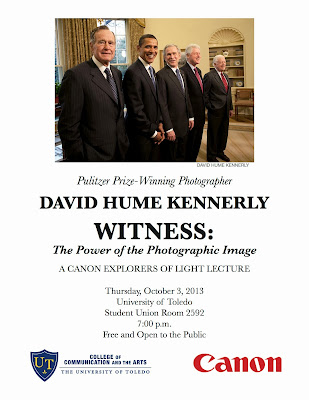 The first to arrive is David Hume Kennerly, Pulitzer Prize-winning photojournalist who will speak at the UT Student Union Oct. 3.
Kennerly’s lecture and slide show, entitled “Witness: the Power of the Photographic Image,” will highlight his worldwide travels and famous shoots, including Nixon’s farewell speech, Vietnam War combat coverage and RFK’s speech prior to his assassination. He is a Canon Explorer of Light, and won the 1972 Pulitzer for feature photography.
Owens Community College photography students are encouraged to attend Kennerly’s free lecture. Owens Prof. Ruth Foote is working on scheduling a bus to transport those interested in attending. I will be on that bus!
The second speaker is Mary Beth Tinker, known for her courageous victory in the 1969 U.S. Supreme Court Case Tinker v. Des Moines Independent School District.
Tinker will speak at the annual Ohio Student Media Assoc. workshops at Kent State University Oct. 1 as part of her national Tinker Tour.
More than 400 high school students will get to hear Tinker revisit those years in the late 1960s, when free speech in schools wasn’t protected by the highest court in the land.
Tinker was a young teenager then who refused to remove a black armband that she wore in protest to the Vietnam War. She took her school to court when they suspended her for her silent protest. Out of that court case came these famous words:

Students do not "shed their constitutional rights to freedom of speech or expression at the schoolhouse gate." - Justice Abe Fortas

Not only will I get to hear Tinker speak, I am one of the many workshop presenters. My topic will be Ethical Dilemmas In Photojournalism.
Is it next week yet?
Posted by Lori King at 12:37 PM No comments:

Most photojournalism majors are required to intern at a newspaper during their scholastic careers.
Internships are necessary for building strong portfolios, making employer contacts and gaining on-the-job experience. Internships are also their first paying gigs, though the pay is often below living wage. Some students intern multiple times, and even a year or two after graduation.
When I was a PJ major at Kent State I did a yearlong internship my senior year at the Warren Tribune in Warren, Ohio. I was hired as a part-time staffer for $5 an hour, and worked 32 hours a week. I could have stayed there indefinitely since it wasn’t an official intern position, but after graduation I moved to Toledo and started stringing for the Associated Press.
The Tribune was my first civilian news photographer job. Photo editor Rob Englehardt said he hired me for my military background. I had a weak photo portfolio, though I had a fair amount of writing clips that included my own photos, like the clip at left.
I wasn’t much of a threat to the full-timers at the Tribune. They were confident in their skills, considering they didn’t have to deal with any of the social media stuff and high tech equipment we use today. A photojournalist’s life was easier back then. Once you mastered those dinosaur film cameras, well, the average citizen couldn’t compete!
Over the years the Toledo Blade has hired dozens of interns.  I don’t remember most of their names but I certainly remember the impact they’ve all made.
Our current intern is Jeff Smith, a recent graduate from Central Michigan University. He is the epitome of the 21st Century photojournalist. He blogs, tweets and Instagrams.
So why do I think interns are a kick in the pants to us old timers? Because they have a fire in their bellies that sometimes is only smoldering in many long-time staffers. They are hungry for a job; to make a difference; to be a part of a visual team that feeds off of each other for inspiration and story ideas.
Interns are idealistic. They haven't yet been jaded, and everything is new and fresh to them because they haven't shot the same events year after year after year after year!
The enthusiasm of interns can either be contagious or threatening. It's up to each veteran photographer to choose how they want to handle the new kid. Contagious or threatening? I've felt both ways.
We should do our best to feed off of each other. We can't deny they inject enthusiasm into the workplace, while we teach them camera skills and ethical/legal values we've honed over the years.
Reciprocity at its best.
Posted by Lori King at 10:32 PM 1 comment:

Intro to PJ students now staff photographers for The Outlook

The Intro to Photojournalism class is small, as it usually is, but it will make a big difference in the Owens community this semester.
For the first time since I’ve been teaching this course, it’s been arranged that every student will be official staff photographers with the Owens Outlook online newspaper (it helps that I’m the new adviser).
During the first week of class each student chose a campus beat to cover for the semester. They introduced themselves to the deans/chairs by hand delivering a letter that explained the beat system.
Taking that big leap from concept to reality wasn’t an easy task for most of them. Here are some of the reasons why they aren't yet comfortable with their new roles as scholastic photojournalists:
·      Invasion of privacy. One student admitted he felt “nosy.”
·      Most don't like news. They don’t read, listen or watch it, and now they are the news.
·      At this point in their young lives most everything they’ve done at Owens has been for homework. Now their work will be published, making it very public and very real.
To be fair to all involved, they will be trained before snapping a single photo. Lessons will include writing AP style captions, interviewing subjects, and how to be ethical and legally fit. This is the journalism part of photojournalism.
As staff photographers for the Outlook they won't be limited to their beats, either. In fact, TJ Barney has already shot his first assignment for the online college newspaper. Before he shot Fall Fest last week I gave him a crash course on caption writing. He admitted to writing down names of his subjects with "shaking hands," but he said it got easier.
So, if you see a bunch of students running around with cameras, press passes and shaky hands, just ignore them so they can do their jobs.
Posted by Lori King at 11:53 PM No comments: