Keeping up with the times: Adding smartphone photography assignment

There is no doubt that journalism is in a constant flux.
Twenty years ago it would have been unthinkable to add a smartphone assignment to a photojournalism curriculum. But that's exactly what I did for the most recent Wayne State University feature hunting assignment.
Rather than having the Digital Photojournalism students shoot their feature pictures with their DSLRs, which they just finished learning about, I threw them a curve ball - shoot a single street scene photo and a photo story with only a smartphone.
This change was absolutely necessary, and frankly, long overdue, because it's now common practice for all, yes... all, of the Toledo Blade reporters to use their phones to take their own still images and video stories when necessary. Our reporters are trained on Videolicious, a video editing app on smartphones.
As a photojournalist, this makes me feel like my job is less secure. Are we that replaceable? Should we news photographers just lay down our $3,000 Canon cameras and submit to the trend of companies cutting out their experience image makers? So, yeah, many of us are struggling with an identity crisis, a tinge of jealousy, and a lot of insecurity. 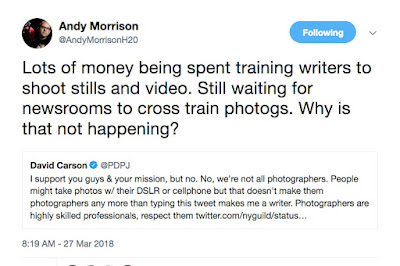 In fact, my colleague Andy Morrison recently brought up a good point when he Tweeted that media companies are spending big money training their reporters how to use their smartphones as cameras, but are they training their photographers how to write? Not yet, but they should.
Being versatile means doing it all these days: Writing. Shooting. Podcasting.
The military was always a strong leader in 'backback journalism,' or convergence. Even back in 1980, when I went through journalism training at the military's Defense Information School, they trained us for both writing and shooting, and it's made me a much stronger journalist because I can do both. I was a reporter who used an old fashioned typewriter to write stories, and had a Canon F-1 film camera always slung on my shoulder.
Now I'm teaching journalists how to shoot with smartphones.
The feature assignment was two prong: 1. Shoot a single 'street' photo and post on Instagram and Twitter. 2. Shoot a photo story and post on Steller, a iPhone storytelling app. Droids users emailed the photos to themselves and posted their images on their blogs.
There's more to the assignment than that, but this my point - smartphone photography is here to stay, and it needs to be taught by all photojournalism instructors [particularly if the students are journalists], regardless of the fact that we could unwittingly be training our replacements.
So, to lead by example, I shot my own Steller story this past weekend. It's the story above with the cute kitty on the poster.
I hope the students liked shooting their stories with a smartphone, because they just got a glimpse into their futures.
Posted by Lori King at 9:13 PM No comments: